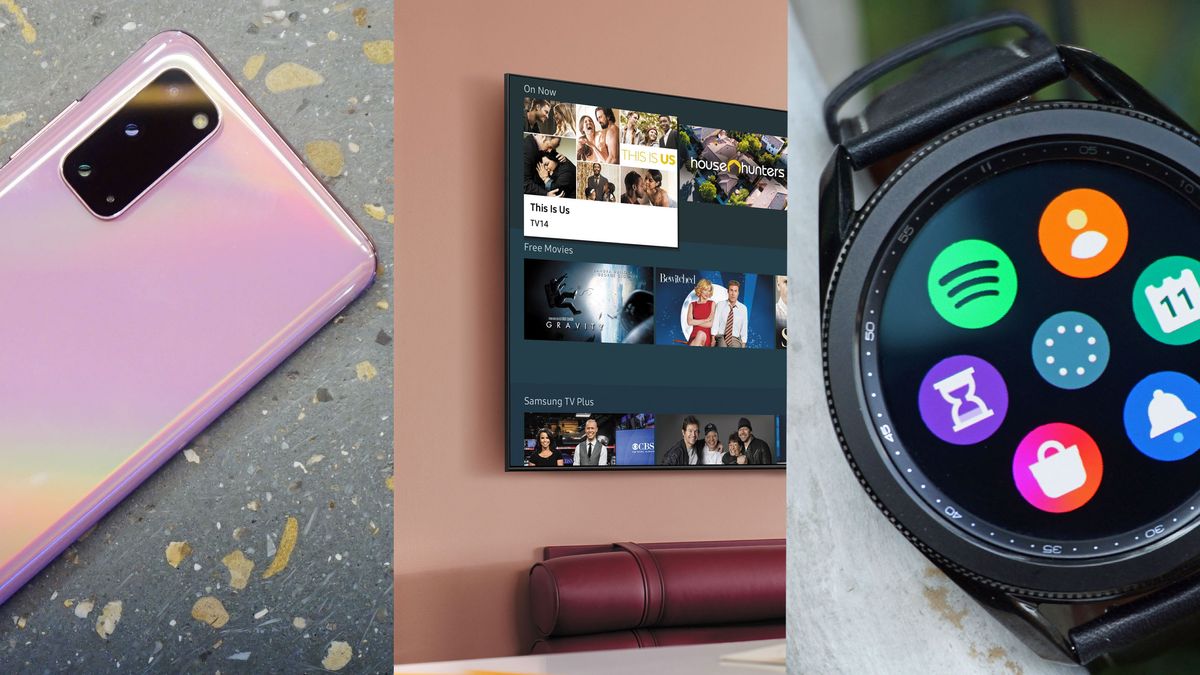 Samsung is one of the largest consumer electronics companies on the planet, with different arms covering almost every device you could possibly want in your home or in your pocket.

In 2020, the company unveiled a range of new products, including new TVs, top-end smartphones and a range of other devices you may have bought all these years – or you might consider.

As 2020 draws to a close, let’s take a look at what we’ve seen from the company over the past year and guide you through the biggest announcements Samsung has made.

Also expect big things from Samsung in the coming months, as we expect the Samsung Galaxy S21 to land in early 2021, and most likely we will also see a whole series of announcements at CES 2021.

The best way to sum up Samsung’s smartphone year is to tell you that the Samsung Galaxy S20 currently remains our best smartphone in the world. Despite announcements such as the OnePlus 8 Pro and iPhone 12, Samsung has been holding its crown since launching its latest Galaxy S series in early 2020.

That series of phones brought 5G to the mainstream Galaxy S series in a bigger way than we saw before, the design was refined, there were some major camera enhancements and the company also fully adopted the 120Hz display technology.

It was also the debut of the new Galaxy S Ultra series with the Galaxy S20 Ultra attracting a lot of attention with its stunning 100x zoom camera. We generally did not like that smartphone, but the rear camera is a phenomenal piece of technology nonetheless.

Then Samsung debuted its second form factor of the foldable phone – the Galaxy Z Flip. This clamshell device may look like a Nintendo Gameboy Advance SP, but it has brought a new way of looking at foldable phones.

Later in the year, Samsung released its Galaxy Note 20 and Note 20 Ultra, with the latter of the two devices getting the most attention. It has a premium design, a powerful 108MP camera and various S Pen enhancements over the Galaxy Note 10 series.

The Galaxy Note 20 did not impress us so much with a ‘Glasstic’ (that is glass and plastic together) at the back and some less than top specifications, despite a very high price. If you want a Galaxy Note phone from 2020, we recommend spending extra and going for the Note 20 Ultra.

Samsung’s foldable journey continued with the Galaxy Z Fold 2 debut in September with a range of improvements over its predecessor. It is generally more robust, and the front screen is much more usable as it has increased in size since the first generation.

Samsung has also launched a new range of devices this year for those who do not want to spend so much, but want impressive technology. The Galaxy S20 Fan Edition debuts in October with some bold and colorful designs and many of the top-end features of the S20 without the super high price.

Overall, Samsung has had an impressive year in the Galaxy world with some leading devices keeping their own on the rankings of the very best smartphones, as well as some daring steps into new worlds like the folding space and the launch of 5G technology.

By 2020, we needed home entertainment more than ever – and for most of us, our big screen TV was the place to find it. According to The NPD Group, sales of 65-inch TVs increased by more than 50% annually in the first half of 2020, meaning companies like Samsung managed to do so in what was otherwise a very rough year.

To its credit, Samsung is not resting on its laurels here – although it could have withdrawn its R & D budget, the Korean company has jumped ahead by announcing a slew of new TV technologies, including a recent version of The Wall .

As the screen sizes get bigger, Samsung is also one of the drivers to make them look better: it has more 8K TV models than almost any other TV manufacturer, and it openly embraces the new HDMI 2.1 specification needed for 4K at 120Hz or 8K / 60.

And yet, as Samsung continues to drive higher innovations in the luxury space, it is losing ground in the budget space as TV manufacturers such as Vizio, TCL and Hisense move to the market with exceptional screens. These companies are doing incredible things, to their credit, but part of the reason for their success is that Samsung has not done as much engineering to the Crystal UHD TVs as with its QLED series: the former are often edge-lit LEDs -LCD TVs with an original 60Hz refresh rate and a basic booster.

Without a crystal ball, it’s impossible to say with certainty what Samsung’s going to do for 2021, but if it turns out to be like this year, you can expect even bigger screens, a greater emphasis on 8K resolution and a wider range of HDMI 2.1 compatible TVs that you can pair with the new Xbox Series X and PS5.

It’s been a busy year for Samsung’s audio wing, with multiple releases during 2020 and more to come on the horizon.

In February, the company announced the follow-up to the true wireless earbuds from Samsung Galaxy Buds; the Samsung Galaxy Buds Plus offers better battery life and better sound quality compared to their predecessors, but fails to really charge due to lack of active noise cancellation and limited audio codec support.

Then, in August, we had the Samsung Galaxy Buds Live, some unusual bean-shaped true wireless earbuds that had been under rumor for months before being released.

These weird earbuds were a dramatic design from Samsung, and were completely different from the buttons we had seen before. They also came up with the promise of noise cancellation – although their ‘semi-open’ design means they could not compete with the Apple AirPods Pro in this regard.

Recently, we heard rumors that Samsung is about to release some more true wireless earbuds. Although we do not think they will be realized before the end of the year, the Samsung Galaxy Buds Pro will be launched in January 2021 along with the new Galaxy S21 series. Is this ‘Pro’ in the name a nod to the AirPods Pro and a hint that they may have active noise cancellation? We will have to wait and see.

One audio device we did not see this year? The long-awaited Samsung Galaxy Home smart speaker. We’ve been waiting for more than two years for the Google Nest and Amazon Echo competitor, and although we’ve given up quite a bit at this point, Samsung did launch a mini version of the smart speaker in February. South Korea. So far, the Samsung Galaxy Home Mini has not left the company’s home field, suggesting that it may have just been a promotional release. In any case, we will not hold our breath for a Samsung smart speaker in the near future.

Wearables was not the focus for Samsung in 2020, but it has made an impressive advance in the market by taking our best smartwatch coat with its latest top-end wristband for a few months.

It’s the Samsung Galaxy Watch 3 that launched in August this year, and the new smartwatch has brought a lot of the Galaxy Watch with impressive tweaks and design changes.

Instead of changing everything we expect from a smartwatch, it refines the experience with an electrocardiogram, a better battery life than its predecessor and also more powerful internally.

Plus, Samsung re-launched itself in the fitness marker in early September. The Samsung Galaxy Fit 2 has a battery life of two weeks and this is the company’s last attempt to tackle Fitbit.