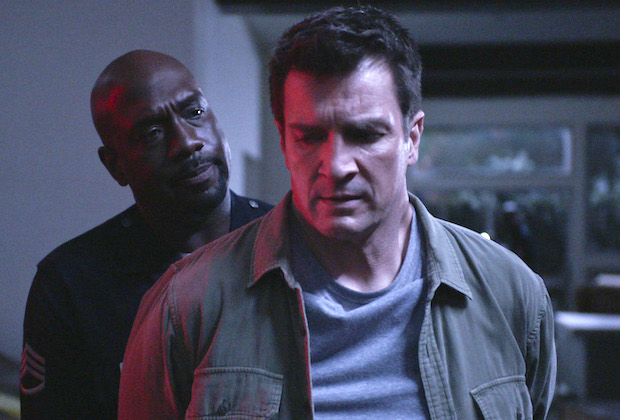 When ABCs The newcomer Next Sunday, January 3 at 10 / 9c, reporting for duty, Officer John Nolan Lucy Ricardo will have some ‘splash’ to do.

When we last got involved in the proceedings, Nolan (played by Nathan Fillion) and his TO Nyla Harper (Mekia Cox) summed up just enough damning, if not circumstantial evidence, evidence against Detective Nick Armstrong (Harold Perrineau) to indicate that the legend of the district was doing crime boss Serj Darien’s bid. When Nolan confronted Armstrong alone, a gunfire was exchanged, with the latter wounded. It was then that Armstrong revealed that he had taken measures to frame Nolan as the other dirty cop with whom the late Erin Cole pulled together – and this shootout will only confirm the scenario.

Nolan hurried home and raged furiously for the evidence Armstrong had planted somewhere. But just as he discovers a compartment in the wall behind his headboard, sirens and lights come off his doorstep, ready to arrest.

Although Officer Nolan is a right if there ever was one, he must now convince his leaders of Armstrong’s illegal undertaking, while also asking very hard questions about his and Harper’s tactics.

TVLine has invited presenter Alexi Hawley to bother what comes next, as well as the series’ plan to tackle a different kind of bad police.

TVLINE | When I got to the finals, I asked you how complicated things could be for John Nolan for ‘Boy Scout’, and you said you were determined to make it as complicated as possible. How did it come out?
I think we made it pretty complicated. Obviously, there are some major obstacles he needs to overcome, including the way he and Harper did business at the end of last season. So it’s not just the framing by Armstrong. It is also the consequences of the path they have chosen.

TVLINE | Will we see Harold and / or Annie Wersching in the premiere?
We’ll see more of both, actually – spoiler alert! Armstrong was, of course, shot by Nolan at the end of the final, and he will desperately try to turn sentiment against Nolan and Harper. And then come Annie [as serial killer Rosalind Dyer], in an unexpected way.

TVLINE | We actually did not talk far in the pandemic, and you barely began to notice what the show should look like going forward. You thought you would have to “slowly roll” the roosters for the last 30 days to expand it. What did you finally decide to do?
We did it. Part of it was definitely powered by COVID; because of the protocols and because of the security issues, I felt that, as a show, we could not honestly put our police in a staff room. So we basically felt, ‘Let’s just discuss the first nine or ten episodes, hoping that once we’re there, things will change,’ and I think the outcome was really good. It was nice to really check out the last 30 days of a rookie, both the ‘senioritis’ that go along with it – Lucy (Melissa O’Neil) and Jackson (Titus Makin Jr.) are basically done with training officers and still students – but also the increase in tension of Tim (Eric Winter). “Well, I only have you 30 more days, so I have to double my training and put you through the wringer one last time,” such things.

TVLINE | You say that Tim can actually get even more intense during this last piece?
Definitely. He feels that he has only been with her for a few weeks, and therefore he wants to make sure that she is properly, fully trained before sending her into the world.

TVLINE | Will we ever meet new rookies?
We will. You know, it’s interesting – we can not do the staff room and try it on the road, but because it’s so characteristic of a rookie, by sitting in the front row, the time our rookies move back goes’ be a thing. And of course, if a new rookie or two shows up, it’s also a thing for them to take over that place. I do not want to hurt the program story by not having those moments, but it’s a slow role.

TVLINE | You gave me a preview of the character that Brandon Routh (Legends of Tomorrow) play, Officer Doug Stanton. Is he your main entry into the subject of policing issues? Or are you going to approach it in different ways?
He is definitely one of the ways in, but we approach it in several ways. One of the things we have, and what most other police shows do not do, is that we are a patrol show. Most other shows are investigative, and they deal with one crime a week, so they’re really a bit caught up in the way they can talk about policing issues. But we do so many different things in each episode, so every call we roll in, in three different patrol cars, can be anything. It allows the freedom to honestly detect the complex issues in policing – which is too much to mention – honestly, throughout the season.

Brandon’s character comes in as Jackson’s new training officer, as Lopez (Alyssa Diaz) is promoted to detective, and he’s a problem. He’s definitely a cop who crosses the line in ways that are especially uncomfortable for Jackson, and that enables us to ‘How can you fix that?’ We know how difficult it is to discipline or get rid of police when the unions are so strong, and because of the rules that are there to protect them. But you also have the vulnerability of Jackson as a rookie, who can be fired for anything, and try to navigate the waters of a training officer he ultimately disrespects. It’s very dynamic and very intense, and in the end it allows us to really express a lot of our characters in their feelings about things, in terms of Brandon’s character.

By the way: for Brandon to come in and play a character, this polarizing, in this climate, is a testament to his bravery as an actor, and to his commitment to this cause. It is potentially risky for him, and yet he is committed to shedding light on this issue. I will be eternally grateful that he is willing to step in and play a character that is going to be challenging.

TVLINE | What kind of personal storylines are at stake this season?
We actually have a lot. When we broke season 3, of course, we felt a great responsibility to respect all these conversations about policing and dig into a lot of problems, but we also did not want to lose what made our show our show. We do not serve anyone when we suddenly become American crime or an after-school specialty – anything that is not The newcomer. Our show has a lot of fun in it, but at the same time we also do serious things, and we do romantic things, and that’s why we were committed to staying the same show, which I proudly say we really did. They spoiled [one personal storyline] in one of the promotions – I was hoping they wouldn’t – but you also got Lopez a detective and suddenly ended up at the bottom of the food chain; it’s going to be a runner for her this season. We’re also going to see Nolan’s mom this season, so I think it’s going to be very exciting.

Everyone is going to have personal stories because I think that’s what people really love. Like that they do not really show up for police work, just as much as they show up because they care about these characters, and if so, there will be romance. There will be all sorts of things.

Want to create The newcomer, or for any other show? Send an email to [email protected] and your question can be answered via Matt’s Inside Line.