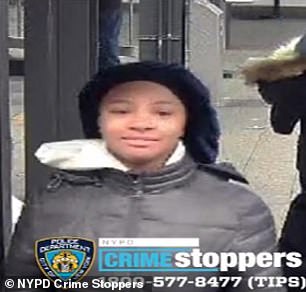 By Marlene Lenthang For Dailymail.com

Police are looking for six suspects who punched an Asian woman several times in the face for not wearing a mask and told her ‘anti-Asian statements’ about the coronavirus in a subway train .

They allegedly confronted her because she was not wearing a mask and according to the ABC7 made anti-Asian statements about the virus.

Their verbal attack became physical and the victim was punched in the face several times before the group ran away.

Police are looking for six suspects who punched an Asian woman several times in the face for not wearing a mask and said ‘anti-Asian statements to her’ about the coronavirus on December 17 in West Metro station 4 St in New York. A view of two of the suspects captured on the cameras above

The victim was left with bruises but refused medical help.

The NYPD’s task force for hate crimes is investigating the incident.

Police on Sunday shared four surveillance photos of the six suspects and asked for help identifying them and offered a grant of up to $ 2,500.

Since the onset of the pandemic, there have been reports of racist attacks on Asian Americans, as the first reported cases occurred from Wuhan, China.

Trump has also repeatedly called COVID-19 the ‘China virus’ and blamed China for the global pandemic.

Earlier this year, a video appeared on social media showing a subway passenger spraying a Febreze bottle on an Asian man on the train.