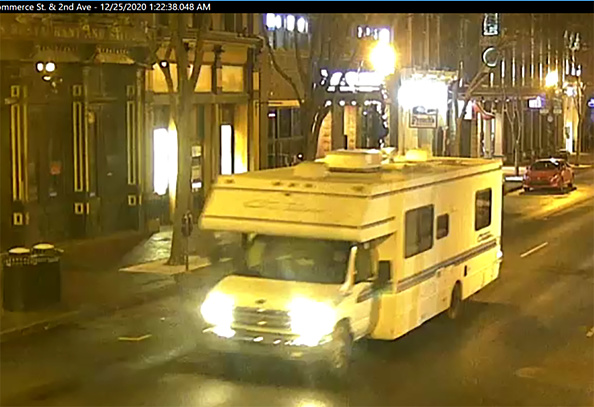 Metro Nashville Police Department (MNPD) officials said during a news conference on Sunday that music from the suspect’s RV had been played before the Christmas Day explosion in Nashville.

Metro officer Tyler Luellen, one of six officers who spoke during the MNPD briefing, said before the explosion in Nashville, the suspect or suspects alleged that RV made an announcement to evacuate the area, followed by a countdown.

After the countdown, the officer claims that music started playing from the RV.

“What I remember was ‘downtown, where the light is shining brightly,’ Luellen said, referring to the song being played while he and his fellow officers worked quickly to get people into Second Avenue North and Commerce. Street environment to evacuate.

The officer said he later looked up the song and found out it was the hit “Downtown” by British singer Petula Clark in the 1960s.

“If you’re alone and life makes you lonely / you can always go downtown / if you’m worried, all the noise and rush / It seems to help, I know, downtown,” Clark sings at the beginning of the track.

Clark’s hit song was also featured in the television series Lost several times because it was used during the show to have a frightening effect.

During the briefing, police officer James Wells also revealed that the RV had cameras installed around the mirrors of the car.

“There were also cameras on the RV like surveillance cameras around the mirror,” Wells said. “It felt like whoever was behind us was watching.”

Wells said he had temporary hearing loss after the blast, and Luellen was hit on the ground.

According to the MNPD, three other people were sent to the area’s hospital with injuries that were not considered life-threatening.

Investigators are trying to determine a motive for the blast caused by the suspect, Anthony Quinn Warner.

Some speculate that the blast was probably the result of a suicide bombing, as human remains were found in the RV after the blast.

Senior law enforcement officials have previously confirmed Newsweek that investigators were set up to take a DNA test from Warner’s mother to determine if the remains found belonged to him.

“Assuming it’s the bomber’s mother, the FBI labs are in turn to confirm in 48-72 hours,” one senior law enforcement official said earlier. Newsweek.

The FBI is also investigating whether Warner acted in response to 5G conspiracy theories.

The MNPD tells Newsweek they did not comment further, saying they were referring to Luellen’s remarks made during the news conference.

Newsweek Clark issued, but did not hear in time for publication.