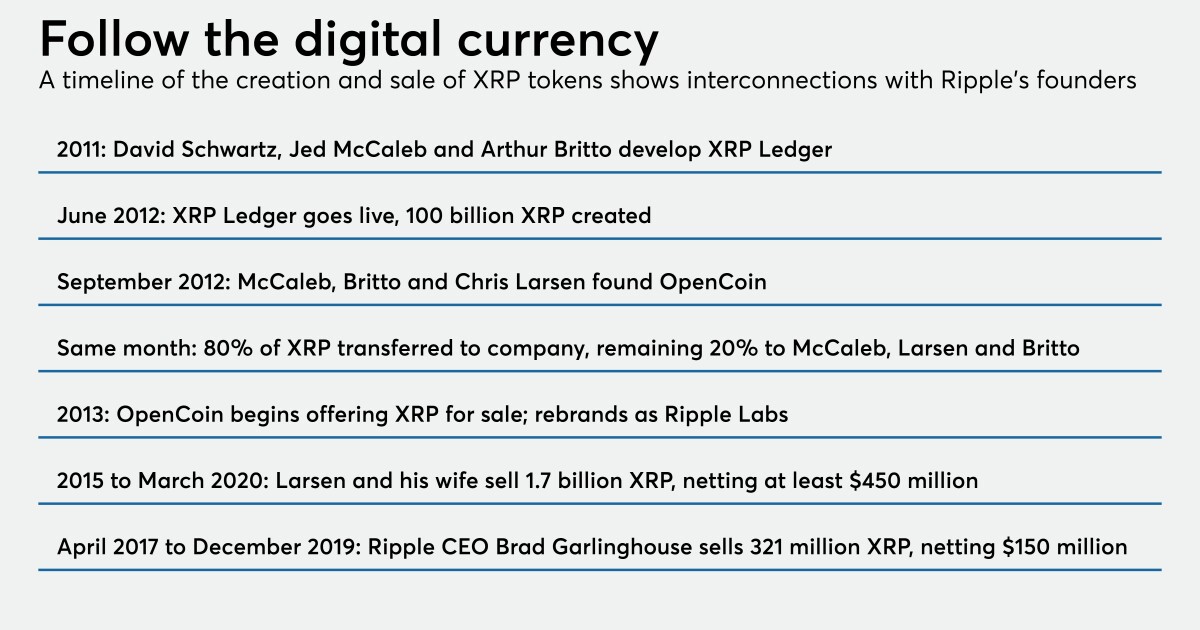 Banks that use Ripple’s software for cross-border payments, including PNC Financial Services Group, Bank of America and Banco Santander, received unwelcome news last week when the Securities and Exchange Commission complained to Ripple with a 71-page complaint.

The complaint sheds a harsh light on how the company is raising money by selling digital tokens called XRP.

According to the SEC, Ripple executives sold 14.6 billion XRP units for more than $ 1.38 billion to finance the company’s business and gain personal wealth without registering their XRP offers and sales with the SEC. The action violated several security laws, the complaint reads. The SEC seeks to permanently prohibit Ripple and its leaders from selling unregistered XRPs, allowing defendants to loot “all bad profits” from the transactions and imposing unspecified civil fines.

What does this mean for the banks that work with the San Francisco company?

In the early days of Ripple and XRP, some banks were over both.

The capital market division of Royal Bank of Canada, a former partner of Ripple, enthusiastically endorsed Ripple and XRP in a 2018 report called ‘Imagine 2025’.

ATB Financial in Edmonton began launching Ripple’s xCurrent cross-border payment software in 2016. Tim Wan, then director of innovation at the $ 43 billion ATB, saw Ripple as a software company trying to replace current methods. of international money movement (basically Swift) in a more efficient and cheaper way – ‘which is respectful’, he said. “And I believe there is a need.”

But Wan, who is now a digital advisory board member at technology firm Box, had reservations about XRP at the time.

The SEC case will affect Ripple’s relationship with banks, he said.

“Banks are built on the idea of ​​trust,” Wan said. “Banks are incredibly sensitive to a perceived lack of confidence in any technology platform used for money movement.”

An ATB spokesman said the bank has not been involved with Ripple since 2016.

BBVA did a similar pilot with Ripple in 2017, but also did not push it forward. The bank declined to comment on the SEC case.

Santander, a large Spanish bank, has been using Ripple’s xCurrent software for cross-border payments since 2018. The bank does not use XRP. PNC started working with xCurrent at the end of 2019. Bank of America has been working with Ripple since 2016. All three declined requests for comment. Ripple did not respond to a request for comment.

Jay Dubow, a Troutman Pepper partner who previously worked at the SEC, pointed out that Ripple’s software is separate from the company’s XRP sales.

‘As long as the company has the ability to handle support the software, there should be no problems, ”Dubow said.

Ripple has long encouraged banks to use XRP as a mechanism to move money around the world.

Using Ripple’s xRapid software, banks were able to use their own local currency (for example, US dollars) to buy XRP. Then they could buy the currency of the foreign country with that XRP and use it to make the payment, instead of using a network of correspondent banks.

Euro Exim Bank, which in St. Lucia and London based, said last year that it plans to start using XRP for cross-border payments. The company did not respond to a request for comment.

No US bank uses XRP in this way yet, at least not in public.

In an interview last year, Manish Kohli, global head of payments and debtors at Citi, predicted that very few banks will use cryptocurrencies such as XRP in international payments because of the market risk that cryptocurrencies contain.

The SEC’s complaint appears to reflect the banks’ cautious stance on XRP.

According to the complaint, Ripple made its money not by selling software, but by selling XRP.

In 2019, for example, Ripple earned $ 23 million from the sales of its xCurrent and xVia software, but raised $ 200 million by selling XRP to investors.

“In other words, the vast majority of Ripple’s revenue comes from its sales of XRP, and Ripple relied on these sales to finance its operations,” the complaint reads.

On top of that, one of the original founders of Ripple, Chris Larsen, reportedly earned $ 450 million from the sales of XRP that he donated to himself when he and his co-founders created the initial $ 100 billion. From April 2017 to December 2019, Ripple CEO Brad Garlinghouse sold more than $ 321 million of the XRP he received when he joined the company, earning $ 150 million.

The accusations made by the SEC have revolved around Ripple for years, in several class actions brought by investors and in off-the-record conversations among people who follow the business.

Ripple and Brad Garlinghouse are likely to argue in court, as has been said in public comments in the past, that XRP is a decentralized digital currency.

In a blog Garlinghouse posted last week, arguing that XRP is not a security because ‘XRP is not an’ investment contract ‘. XRP holders do not share in Ripple’s profits or receive dividends, nor do they have voting rights or other corporate rights. Buyers receive nothing from their purchase of XRP except the asset. In fact, the vast majority of XRP holders have no connection or relationship with Ripple. ”

Brian Klein, a partner at Baker Marquart, who has represented cryptocurrency companies in similar cases in the past but is not involved, said the SEC’s allegations were untested.

“There is, of course, another side of the story that has not yet been told and that deserves to be heard,” he said. ‘The case could be an existential threat to Ripple because of the fines the SEC is seeking. Unfortunately, filing this case could also permanently damage XRP. That mere allegations by the SEC could be the death knell for a cryptocurrency is very unfortunate. ‘

The SEC has settled two cases similar to this, Klein said.

In June, the U.S. District Court for the Southern District of New York approved a settlement with messaging software company Telegram, whose unregistered supply of digital tokens called Grams violates security laws, according to the SEC. Telegram has agreed not to sell Grams anymore, to return more than $ 1.2 billion to investors and to pay a $ 18.5 million civil fine. In May, the company discontinued its cryptocurrency business.

“The SEC has been taking a lot of action against cryptocurrency companies for a number of years,” Klein said. “I think the SEC has unfortunately chosen to use enforcement as a tool for regulation rather than provide clear guidance.”

He would prefer regulators like the SEC to work with Congress to create laws to control cryptocurrencies.

“Cases can take years to work through the courts,” Klein said. “And even when the SEC tips win, as with Telegram and Kik, the district court’s rulings are not binding on other circles or even other courts in the same circle. What you have is a process of reading tea leaves instead. of clear guidance. “