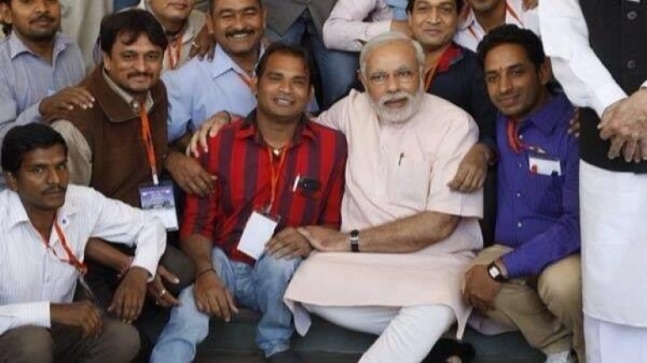 While Digvijaya Singh, senior congresswoman, recently called Prime Minister Narendra Modi unfair to farmers in the country, an image of him on a staircase with a group of men is viral on social media. The prime minister, who is a world leader, is said to be sitting with his office staff, some of whom are peonies. The report describes the image as a symbol of equality and camaraderie.

An excerpt from the caption at one such post in Malayalam translates into: ‘The Prime Minister of India is sitting on stairs with his office staff. Four of them are peonies. He is a world leader as well as a karma yogi. There is no inequality here. The message here is to sit with us, let’s work together. Jai Hind. ”

India Today Anti Fake News War Room (AFWA) found the allegation misleading. The men seen in the photo are staff members of BJP’s office in Gujarat and the image was taken in February 2014. Modi will take over the reins in May 2014.

The archived versions of similar posts can be seen here, here, here and here.

Using reverse image search, we found that the same image was shared in 2014 as BJP’s office in Gujarat.

The caption on one such post on Facebook posted on February 10, 2014 reads: ‘Narendraji modi with bjp office staff of gujrat. Proud moment for office staff (sic). “

Modi took office as prime minister in May 2014, while the image in question has been circulating since at least February 2014 – before Modi became prime minister.

For better clarity, AFWA reached out to Bharat Pandya, the chief spokesperson of BJP’s Gujarat unit. Pandya confirmed to us that the image was clicked before Modi became the prime minister. He also said that the men sitting next to Modi are the staff members of the BJP’s headquarters in Gujarat.

“This image was clicked on 10 February 2014 during the inauguration of BJP’s office building Gujarat, Shree Kamalam. The men sitting with Modi ji are all staff members of our BJP office. Modi ji was also the then Prime Minister of Gujarat. He did not become the prime minister, “Pandya confirmed.

Inauguration of Gujarat BJP’s new headquarters, Shri Kamalam in Gandhinagar, was held on February 10, 2014. Besides Modi, the then Gujarat CM, the veteran of the BJP, LK Advani, was also present at the ceremony.

Modi also tweeted from his official Twitter tutorial about the inauguration of BJP’s new headquarters in Gujarat.

It is therefore clear that the image in question was taken before Modi became the Prime Minister of India and that the men with Modi are staff members of the BJP State Office in Gujarat in Gandhinagar and not of the Prime Minister.

ClaimThe photo shows Prime Minister Narendra Modi sitting on stairs with the staff members of the Prime Minister’s office, some of whom are peons. The image is a symbol of equality and camaraderie. ClosureThe image in question is from February 2014 – even before Modi became the Prime Minister of India. The men pictured are BJP headquarters staff in Gandhinagar, Gujarat.