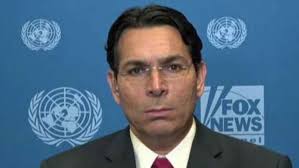 Former United Nations Ambassador to Israel Danny Danon on Sunday offered insight into what a Biden presidency could mean for the Middle East, urging President-elect Joe Biden to ‘continue the momentum’ President Trump’s peace initiatives have been created in the region.

“I hope the president-elect will continue the momentum, because it’s not only good for Israel or the modern Arab countries, it’s good for the US,” he told Fox News host Eric Shawn.

Danon praised Trump for moving the US embassy to Jerusalem, removing the US from the Iran nuclear deal and mediating the Abraham agreements that would strengthen relations between Israel and four Arab states – United Arab Emirates, Bahrain, Sudan and Morocco – normalize.

“I flew to Dubai a few years ago and it was a very sensitive visit. Today you have 14 flights a week from Dubai to Dubai, so we see all the fruits of peace,” he said, “and we are excited about it. “

Danon, now the chairman of World Likud, a political party in Israel, said he hoped the new government would continue with Trump’s approach to the Iran deal and not resume the deal.

Trump has announced that he will withdraw the US from the Obama-mediated agreement – also known as the Joint Comprehensive Plan of Action (JCPOA) in 2018, calling the agreement at its core ‘flawed’.

However, Biden has expressed plans to rejoin the agreement if Iran complies strictly with the nuclear deal again.

“First of all, we need to look at the facts and the facts are that the agreement is a bad thing … the Iranians have ignored it, we have seen what they have been doing for the last five years, and everything we have learned. about everything happening today, ‘Danon said.

He advises the Biden foreign policy team “not to listen to the Iranians, to apply more sanctions and not to try to appease.

JAMES CARAFANO: WE DO NOT HAVE AN IRAN TRADE INCOME

“If you try to appease them, they take advantage of it,” he argued, “and I think it would be bad for the United States to play that game.

Instead, Danon said he would ‘recommend’ [to] ‘the new government to put more pressure on, to work with the allies in the region, and if the Iranians are willing to change the agreement that I doubt, you can talk about it,’ he explained.

“But you do not immediately run and hug them and give them what they want.”