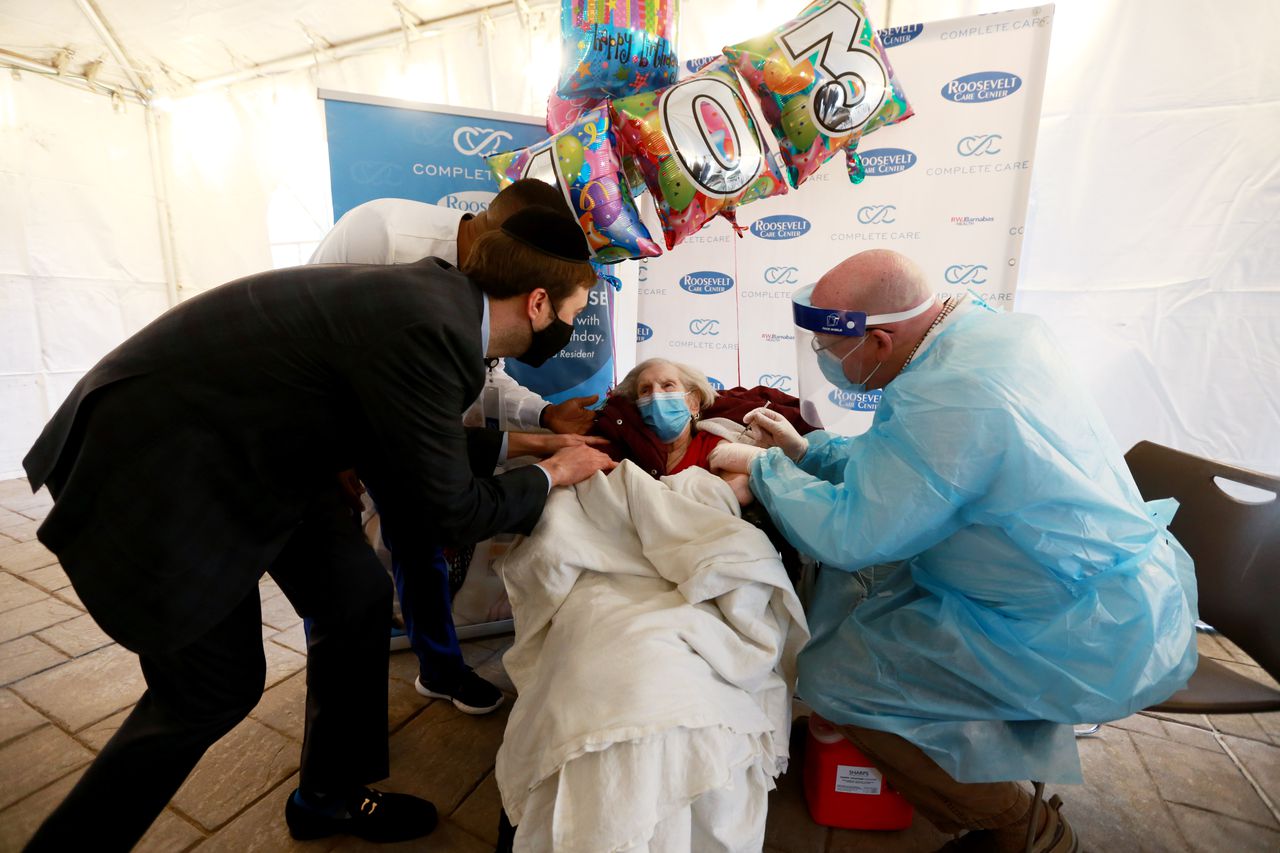 A 103-year-old woman became the first resident of a nursing home in New Jersey on Monday to receive a vaccine for the coronavirus.

Mildred Clements fired the shot shortly after 9 p.m. Received when Governor Phil Murphy and the state health officer were there to witness the event at the Roosevelt Care Center in Old Bridge.

“We went through some dark times together,” Murphy said, “but the light began to break on the horizon.”

Roosevelt is one of about 90 long-term health care facilities nationwide planned for vaccinations during the week, and Clements was the first of more than 83,000 residents to receive the vaccine in early February, according to the Murphy administration.

Applause and cheers came up in a tent on Monday where the vaccines were administered.

Esther Moodey, a nurse at the plant, was the second person to receive the vaccine. She said she felt ‘normal’ after receiving the shot in her left arm and encouraged everyone to get it.

“During the first wave of this pandemic, we struggled with exhaustion (and) uncertainty,” Moodey, who worked at the facility for 14 years, said after receiving the vaccination.

“All the months later, we are working tirelessly to protect and care for our vulnerable residents,” she said. “I am honored to be the first staff member.”

Rosemary Connelly, 92, of Staten Island, said she was excited to receive the shot because it meant she could soon see her family, including her daughter, who has been visiting her every day since she arrived in 2018, but since then could no longer visit. March.

“This is a very good opportunity,” she told the CVS pharmacist who administered the Pfizer vaccine. “I recommend it to everyone.”

Although the shots were fired with great fanfare, it came a week later than they could have after the state missed the federal deadline to submit paperwork by one day. The bug meant other states – including New York and Connecticut – were a week ahead of New Jersey to vaccinate staff members and residents at nursing homes and other long-term care facilities.

Officials blamed the federal government in part for changing the vaccines. In addition, officials say the delay is also because the state has decided to include not only nursing homes, but also thousands of residents at development centers, group homes and other long-term facilities.

Murphy defended his government last week, arguing that anyone who thought the vaccination would be simple without ‘bumps, twists or turns’ is ‘no attention’.

The number of facilities to get the vaccine is expected to increase as more of them set up vaccination clinics with CVS and Walgreens as part of a federal program, said Judith Persichilli, state health commissioner.

Nearly 300 of the more than 650 long-term care institutions in the state are already planned to vaccinate residents by February. Murphy said Monday additional sites will be added within weeks.

In total, the state has set aside about 500,000 doses of Pfizer vaccine to cover about 17,000 facilities, Persichilli said. Vaccinations last for the rest of December, throughout January and until February.

Murphy, a Democrat, has been criticized by Republicans for the one-week delay in deploying the vaccines at long-term care facilities.

GOP government challengers have issued statements condemning Murphy and his administration, and his predecessor, former Gov. Chris Christie. tweeted that it is ‘the biggest failure of the COVID response in New Jersey’.

New Jersey began implementing its phased-in vaccination program COVID-19 two weeks ago. It started with health workers at hospitals and health care facilities across the state. Emergency workers, residents over the age of 65, and those with high-risk medical conditions will come to health care workers and long-term care facilities, while a broader rollout to the general public is expected in April, May or June.

The goal of New Jersey is to vaccinate 70% of the adult population in the next six months.

The state is also opening six mega-sites and more than 200 satellite sites to vaccinate residents in the coming months.

Our journalism needs your support. Please sign in today at NJ.com

Matt Arco can be reached at [email protected].

Sophie Nieto-Munoz can be reached at [email protected]. Follow her at @snietomunoz.